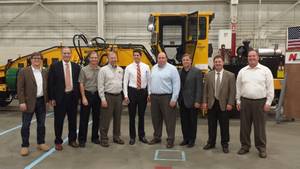 Nordco President and CEO Bruce Boczkiewicz welcomed Rep. Ryan, along with other guests from the rail industry, including Kevin Soucie of Canadian National, Ken Lucht of Wisconsin & Southern and Oak Creek Mayor Steve Scaffidi. The event was organized by the National Railroad Construction and Maintenance Association (NRC).

During his visit, Rep. Ryan was provided with a briefing on the history and current operations of Nordco, followed by a tour of the facility. The Oak Creek facility employs 175 people and manufactures maintenance-of-way equipment.