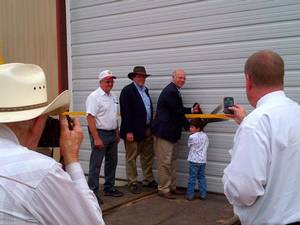 The NRC's grassroots program was created to invite United States Congressmen to visit NRC member facilities and construction project sites. These visits give the Members of Congress firsthand knowledge of the rail industry and demonstrate how rail contractors and suppliers are positively affecting the rail industry and the local and national economy. If your company is interested in hosting your Congressman for a visit, please contact Ashley Bosch to begin the process.
Eunice, NM - On 6/13/12, U.S. Congressman Steve Pearce (R-NM-02), a member of the Financial Services Committee and Chairman of the Congressional Western Caucus, joined the Texas-New Mexico Railroad (TNMRR) for a ribbon cutting. The National Railroad Construction and Maintenance Association (NRC) and the American Short Line and Regional Railroad Association (ASLRRA) assisted with organizing the event, which took the Congressman on a short tour of the TNMRR line in eastern New Mexico and then celebrated the opening of TNMRR's new locomotive repair shop.

Ed Ellis, President of Iowa Pacific Holdings LLC. which owns the Texas-New Mexico Railroad, welcomed the Congressman, Eunice Mayor Matt White along with his grandson, and a number of railroad employees and citizens from the region onto a passenger train for an inspection tour. The tour ended at the locomotive repair shop where Congressman Pearce, Ellis, and Mayor White cut the ribbon to officially open the newly constructed repair shop.

During the ceremony, rail officials discussed the importance of small freight railroads in New Mexico and provided an overview of why the short line railroad rehabilitation tax credit (Section 45G) is so important to the rail industry. The TNMRR showcased how they have utilized the tax credit, including maintenance and repair projects that keep the railroad functioning and able to attract customers. TNMRR uses multiple NRC-member contractors and suppliers to perform this work, most prominently Balfour Beatty Rail. Representative Pearce has been a co-sponsor of the bill to extend the tax credit, H.R. 721 The Short Line Railroad Rehabilitation and Investment Act, since October of 2011.

The locomotive shop will also create jobs, which is a key focus for Congressman Pearce. "I commend Iowa Pacific for their commitment to our local economy here in eastern New Mexico," said Rep. Pearce. "Small business growth is my top priority, and investment in infrastructure drives growth in employment for the long term. Energy-efficient rail transportation is essential to economic development in this region."
Post a Comment