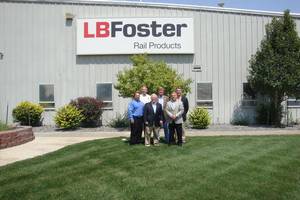 Pueblo, CO - On 8/22/12, U.S. Congressman Scott Tipton (R-CO-3) joined representatives from L.B. Foster and the National Railroad Construction and Maintenance Association (NRC) for a tour of the L.B. Foster facility in Pueblo, CO.

The Pueblo facility, which opened in 2006, is 56,000 sq. feet and employs 23 workers. The plant has reduced manufacturing costs by over 60% since 2007. The plant produces insulated rail joints that are used to create track circuits, which trigger railway signals. This product keeps our nation's complex rail network running smoothly. Rail transport is important to the industrial, energy, and agriculture markets in Colorado and the products produced at the Pueblo facility allow railroads to serve those markets efficiently. The Pueblo plant was named one of Industry Week's 100 Best Plants in 2011. It was noted particularly for its continuous improvement programs and streamlined production process.

Congressman Tipton first met with L.B. Foster executives for a briefing on the history and overview of the company, followed by a tour of the facility and a Q&A session with workers.

"From providing valuable jobs in Pueblo and infrastructure that we rely on to transport Colorado crops and natural resources across this nation, rail is an important component of our state and local economies," Tipton said.