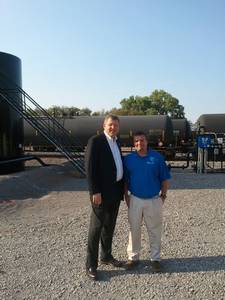 Sayre, OK - On 8/31/12, U.S. Congressman Frank Lucas (R-OK-3) joined representatives from RailWorks Corporation, the National Railroad Construction and Maintenance Association (NRC), and FarmRail System, along with Sayre, OK City Manager Guy Hylton and other local officials to discuss an upcoming rail project on the rail line between Sayre and Clinton and the positive impact the project will have on the region.

Late last year the Oklahoma Department of Transportation was awarded a TIGER III Grant by the U.S. Department of Transportation to upgrade 49 miles of rail line between Sayre and Clinton to accommodate growing shipments of Anadarko Basin crude oil. This project is an important development for local rail customers, the revitalized city of Sayre, the economy of western Oklahoma, and the State-owned rail infrastructure in Oklahoma. The rail line is operated by FarmRail, and RailWorks Corp has won the contract to upgrade the infrastructure and will begin performing the work shortly.

The Congressman first met with the Sayre City Council to discuss the revitalization of Sayre and how the TIGER rail project will impact the city. Following the City Council meeting, the Congressman took a tour of the rail yard that the Mercuria Energy Group uses to ship oil to see firsthand what the project will encompass. The event, organized by the NRC, provided the Congressman an opportunity to discuss the railroad industry's economic impact in the 3rd congressional district of Oklahoma and throughout the rest of the state.