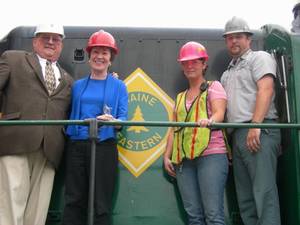 Thomaston, ME - On 9/4/12, U.S. Senator Susan Collins (R-ME), a member of the Senate Appropriations Committee and Ranking Member of the Subcommittee on Transportation Appropriations, joined representatives from the Maine Eastern Railroad, Dragon Cement Products, and local officials for a tour of the Dragon Cement Products facility in Thomaston, ME. The American Short Line and Regional Railroad Association (ASLRRA) and the National Railroad Construction and Maintenance Association (NRC) assisted with organizing the event, which took the Senator on a tour of the cement plant, an elevator ride to the top of the pre-heat tower, and a step-on visit to the locomotive at the Dragon railroad loading facility: Silo 13.

The Maine Eastern Railroad, owned by the Morristown & Erie holding company, works with Dragon Cement to haul their products from their plant in Thomaston to Atlantic Point in Rockland Harbor, where they are loaded onto a barge and transported to Boston, MA. Additionally, Maine Eastern Railroad hauls cement to interchange with a second railroad for eventual delivery to Canada.

Maine Eastern Railroad employs 25 Maine workers, and Dragon Cement employs more than 200 Mainers who rely on freight rail service to move hundreds of tons of cement every year. Not only do short line railroads like the Maine Eastern create jobs, they link small businesses such as Dragon Cement, who would otherwise be cut off from rail access, to the national transportation network.

During the tour, rail officials also provided an overview of why the short line railroad rehabilitation tax credit (Section 45G) is so important to the rail industry. Senator Collins has been a co-sponsor of the bill to extend the tax credit, S.672, The Short Line Railroad Rehabilitation and Investment Act, since January of 2012. The Section 45G short line railroad rehabilitation tax credit requires a company to invest one dollar to receive 50 cents in credit. Short lines are one of the most capital intensive industries in the country, and they need to reinvest every dollar available. For many this need exceeds 30 percent of annual revenues. Reducing taxes on these crucial small businesses maximizes their ability to invest in their infrastructure.

There are six short line railroads in Maine that account for 100% of the total freight rail track mileage in the state, which is extremely important to Maine's transportation network and economy. The Maine Eastern is much like many small railroads in Maine and around the country that also serve communities that depend on rail service. The tour of the Dragon facility and the Maine Eastern Railroad gave rail executives a chance to demonstrate to Senator Collins the positive impact that railroads have on Maine's economy and how they continue to keep Maine's businesses running.