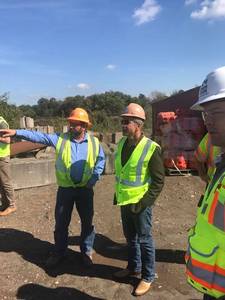 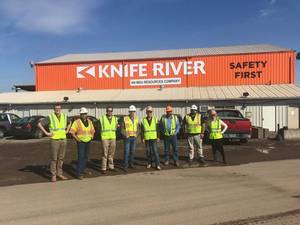 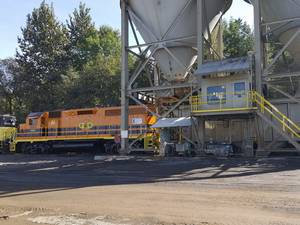 Aggregates being loaded on to a Portland & Western train.


The NRC's grassroots program was created to invite United States Congressmen to visit NRC member facilities and construction project sites. These visits give the Members of Congress firsthand knowledge of the rail industry and demonstrate how rail contractors and suppliers are positively affecting the rail industry and the local and national economy. If your company is interested in hosting your Congressman for a visit, please contact Matt Bell at mbell@nrcma.org.
SALEM, OR - On September 22, 2017, Congressman Kurt Schrader (D-OR-5) joined representatives from Knife River Corporation and the Portland and Western Railroad to tour Knife River’s Salem sand and gravel pit, learn about their extensive railway products and services, and discuss public policy priorities for the business and rail communities in greater Salem. The National Railroad Construction and Maintenance Association (NRC) and the Railway Engineering-Maintenance and Suppliers Association (REMSA) coordinated the event. The $5 billion maintenance of way industry supports over 35,000 jobs nationwide. Combined, the two groups represent 15 companies in Oregon.

Knife River Corporation is one of the largest materials and contracting companies in the United States, employing over 5,000 nationwide. A top ten aggregate producer in the United States, Knife River is fully American owned and operated. Knife River is the largest producer of construction aggregates, asphalt, and ready-mix concrete in the State of Oregon and utilizes all modes of transportation to move their goods. They proudly employ over 1,000 throughout the state of Oregon.
The tour was led by Fred Sondermayer, Materials Manager, Knife River Corporation. The Knife River Reed facility is a 300+ acre sand & gravel pit that produces high quality construction aggregates for the mid-Willamette Valley, and Portland-metropolitan areas. The aggregates are also used in the production of hot mix asphalt, and concrete. The mine has an estimated 25 million tons of aggregates reserves that will serve the area well into the future.

In addition to the construction aggregates that are shipped by truck, about ½ a million tons of aggregates are shipped out by rail, every year, to serve Knife River operations in the greater Portland-area. Knife River uses a multi-modal strategy to deliver its products in the most efficient manner possible; shipping construction aggregates by truck, rail, and barge. Their facility is directly served by Portland & Western Railroad, which interchanges with BNSF Railway, Coos Bay Rail Link, the Central Oregon & Pacific Railroad, the Albany & Eastern Railroad, and the Union Pacific Railroad.

“We are honored to host Congressman Schrader and share our Salem success story and continued commitment to the region and state with him,” said Stratos Flanders, General Manager, Mid-Willamette Valley, Knife River Corporation. “As a major shipper of aggregates, it is crucial that our company is continually served by efficient and safe freight rail. Railroads invest tens of billions of private dollars annually into their networks, supporting a safe rail network and rail supply jobs across our country. It is critical to our continued success that federal policies continue to enable consistent freight investments.”
Congressman Kurt Schrader, a resident of Canby, is currently serving his fifth term representing Oregon’s Fifth Congressional District. He serves  on the House Committee on Energy and Commerce which oversees a vast portfolio of issues affecting everyday Oregonians ranging from health  care to the environment. Rep. Schrader continues to utilize his experiences as a farmer and small business owner to create high-paying jobs in  Oregon. Rep. Schrader is also a member of the Blue Dog Coalition, the New Democrat Coalition, and the bipartisan No Labels Problem Solvers Caucus.

“I greatly appreciate the opportunity to tour Knife River Corporation’s local operations and learn more about their vast operations in the state of  Oregon” said Rep. Schrader look forward to continuing to engage with those present today as we work together to create jobs in Oregon, spur  economic activity across the state, and ensure our communities are safely and efficiently served by freight and passenger rail service alike.”

The group discussed the private nature of America’s freight railroad network, which does not rely on federal support for the expansion or  maintenance of its right-of-way unlike other modes of freight transportation. Also discussed was the recent bipartisan and bicameral introduction of the Building Rail Access for Customers and the Economy (BRACE) Act which is cosponsored by Rep. Schrader.

In Oregon, nineteen freight railroads operate over 2,400 track miles and employ over 2,000. Our eight Oregon based members and their employees rely on a healthy, sustainable and safe rail network for their livelihoods.
Post a Comment