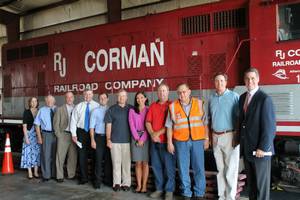 Upon his arrival, Congressman Dent was greeted by R.J. Corman's Allentown team, including Manager of Government Affairs J. Doyle Corman, General Manager North Operations Timothy Potts, and Operations Manager Brian Szczepanski. The Congressman was briefed on R.J. Corman's current operations and led on a tour of their rail yard and material sales facility.

"R.J. Corman's locomotives do more than power their trains. They help power the economy of the Lehigh Valley by bringing necessary raw materials for our local businesses into the region" said the Congressman. Congressman Charlie Dent serves on the Appropriations Committee and Ethics Committee.

The event also received coverage in: