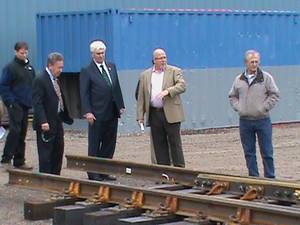 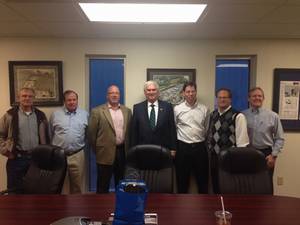 Knoxville, TN - On 3/17/14, U.S. Congressman John Duncan, Jr. (R-TN-02), a senior member of the House Transportation and Infrastructure Committee's Subcommittee on Railroads, Pipelines, and Hazardous Materials and Chairman of the Panel on Public-Private Partnerships, joined representatives from UNITRAC Railroad Materials (UNITRAC) and the National Railroad Construction and Maintenance Association (NRC) for a tour of UNITRAC's manufacturing facility in Knoxville, Tennessee. Invited guests at the event included representatives from UNITRAC customer the Gulf & Ohio Railway and UNITRAC supplier and NRC member company Nisus Corp as well as local press. The NRC organized the event.

Upon his arrival, the Congressman was briefed by UNITRAC executives on the company's history and current operations. They discussed the company's tremendous growth over the past decade and how UNITRAC is creating jobs and positively impacting the local economy in Knoxville, as well as providing crucial materials for the national rail network.

After a safety briefing from UNITRAC's corporate safety officer, UNITRAC's President, Ray Lambert, led the Congressman and invited guests on a tour of the facility, which manufactures track components and facilitates the distribution of new rail, relay rail, and rail accessories. UNITRAC has 145 employees nationwide, about half of which are located at their Knoxville headquarters. Their customers include Class I railroads, rail transit agencies such as WMATA, state DOT's such as Kansas DOT, and Amtrak.

"I think most people in the railroad industry don't toot their horn nearly enough." stated Duncan. "The economy is better, our environment is better when we are doing as much as we can with the railroad industry. I am pleased to learn more about UNITRAC Railroad Materials' growth and expansion happening right here in Knoxville. They are producing essential components for rail infrastructure which is vital to the movement of goods and people."