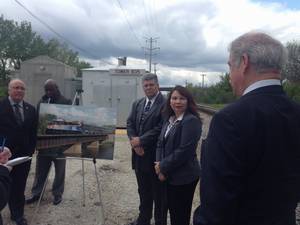 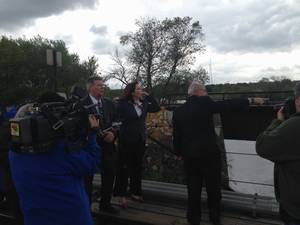 Elgin, IL - On 5/15/14, U.S. Congresswoman Tammy Duckworth (D-IL-08), a member of the Armed Services Committee and the Oversight and Government Reform Committee, toured the Fox River Bridge on Metra's Milwaukee West Line in Elgin, IL. The event was well attended with representatives from Metra, the NRC, and the media.

Originally built in 1881, the bridge, located about 35 miles from downtown Chicago, is a 500-foot, single-track railroad bridge that is used by 49 Metra trains and up to eight CP trains each weekday. Starting next year, it will begin to be used by Amtrak trains between Rockford and Chicago.

Metra has applied for $17 million in funding under the federal TIGER (Transportation Investment Generating Economic Recovery) discretionary grant program to help cover the $34 million cost of replacing the bridge, known by its bridge number, Z-100. Metra is proposing to contribute a local share or $11 million, and Canadian Pacific Railroad, which uses the bridge for freight trains, is proposing to cover the final $6 million.

NRC Chairman Bill Dorris discussed the importance of TIGER funds to capital rail projects such as this one saying it's "a tremendous benefit to a vast majority of different trades within the rail industry as well as the suppliers and in the end it benefits the passengers who ride the train."

Metra is proposing to replace the bridge with a completely new structure with two tracks and a modern, PTC-compliant signal system. The new bridge and signals will eliminate speed restrictions, improve the line's reliability and operational flexibility, reduce maintenance costs and help ensure the continued efficient operation of the Chicago region's rail network.

"We can't afford not to fix these bridges…this is just one of 300 bridges in the Chicago area that need to be upgraded and it's long overdue" said Duckworth. "When we invest in these infrastructure projects we are also investing in the local economy…construction workers, laborers, architects, and all the firms that supply the materials for the work will benefit as well."