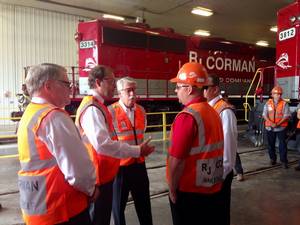 After a safety briefing, the Congressman was led on a tour of the rail yard, which included a mechanical shop, sand train operations, a steam locomotive, and a dinning and kitchen car. The event concluded with a train ride from Lexington to Midway and back.

"It was a pleasure to meet with the employees and leadership of the R.J. Corman Railroad Group today," said Rep. Barr. "Our meeting highlighted the importance of rail transportation both throughout Central Kentucky and the United States. This family business is a true testament to the foresight of the late Rick Corman and his many contributions to both the railroad industry and our community."