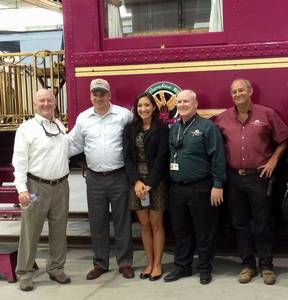 Upon his arrival, Congressman Hudson was greeted by ACWR's executive team, including President & Owner Robert Menzies, VP of Marketing Russ Smitley, VP of Operations & General Manager Carl Hollowell, and Market Manager Anthony Menzies. The ACWR is the largest privately held short line railroad in North Carolina, and it connects with both the CSX and Norfolk Southern national rail networks. ACWR lines run from Charlotte towards Raleigh, and extend south towards Pinehurst. Their freight customers manufacture and distribute various commodities including plastics, poultry, and dimensional lumber.

The Congressman met with the ACWR executive team and their invited guests on a newly refurbished business train car, where they discussed the importance of the 45G short line railroad rehabilitation tax credit which creates a strong incentive for short line railroads to invest private sector dollars in upgrading critical freight railroad track. Later, the Congressman was led on a tour of ACWR's Candor facility and was briefed on the planned expansion of their locomotive yard. The event concluded with a train ride from the Candor facility to local poultry feeds, Perdue Farms and Mountaire Farms.

"This new facility is a huge boon to Montgomery County and the entire state of North Carolina" said Congressman Hudson. "Railroads are a critical component of our nation's infrastructure and help businesses expand their markets and bring goods to consumers everywhere. I am very excited about the jobs that will be supported and the contribution that ACWR will make to our state's economic development."