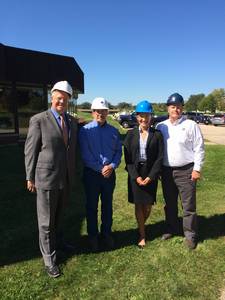 "Atlantic Track's Richmond facility boasts hardworking employees who manufacture special track components vital to railroads nationwide. Atlantic Track is an ESOP (employee stock ownership plan) company where each employee actually is an owner and has a stake in the company's success" said Congressman Hultgren. "They believe in old fashioned blood, sweat and tears, working long hours to meet the high demand for their quality products, and have invested millions to expand their operations in the 14th District. Northern Illinois is a major cargo and freight hub for our nation--seeing Atlantic Track's facility first-hand makes me proud to represent them in Congress."