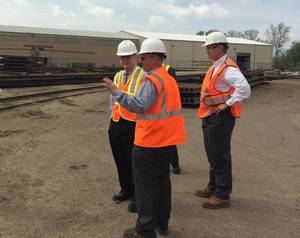 The NRC's grassroots program was created to invite United States Congressmen to visit NRC member facilities and construction project sites. These visits give the Members of Congress firsthand knowledge of the rail industry and demonstrate how rail contractors and suppliers are positively affecting the rail industry and the local and national economy. If your company is interested in hosting your Congressman for a visit, please contact Ashley Bosch to begin the process.
Memphis, TN – On 4/9/15, U.S. Congressman Steve Cohen (R-TN-09) joined representatives from Atlantic Track and the National Railroad Construction and Maintenance Association (NRC) for a tour of Atlantic Track’s Memphis operations and facility. The NRC organized the event.

With five Class I railroads, Memphis is one of the nation’s largest rail hubs. In order to meet the growing demand for quality rail products at home in Memphis and overseas, Atlantic Track plans to break ground this month to expand their Memphis facility. The new addition to their facility will house a $3.7 million state of the art machining center which will yield new jobs and economic activity in the area.

“I am pleased to see Memphis businesses like Atlantic Track expanding due to international demand” said Congressman Cohen. “Their success is creating good-paying jobs right here in the 9th District, and I enjoyed this opportunity to visit their facility.”

Congressman Steve Cohen is a member of the Judiciary Committee, Transportation and Infrastructure Committee and the Subcommittee on Railroads, Pipelines and Hazardous Materials.
Post a Comment