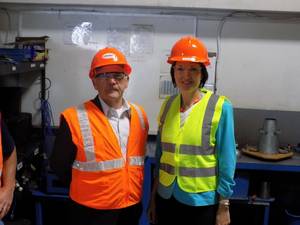 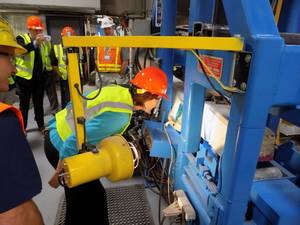 The NRC's grassroots program was created to invite United States Congressmen to visit NRC member facilities and construction project sites. These visits give the Members of Congress firsthand knowledge of the rail industry and demonstrate how rail contractors and suppliers are positively affecting the rail industry and the local and national economy. If your company is interested in hosting your Congressman for a visit, please contact Lindsey Collins to begin the process.
Spokane, WA - On September 22, 2015, U.S. Congresswoman Cathy McMorris Rodgers (R-WA-05) joined Railway Engineering Maintenance Suppliers Association (REMSA) and National Railroad Construction & Maintenance Association (NRC) member L.B. Foster Company for a tour of their concrete tie manufacturing facility.

Mr. Burgess gave an overview of L.B. Foster and their current operations. L.B. Foster supplies infrastructure products and services for major transportation, construction, and energy and utility projects in the U.S. and around the world. Specializing in rail products, among other industries, L.B. Foster employs approximately 100 people at their Spokane facility, which they acquired from CXT Inc. in 1999.

In her opening remarks, the Congresswoman stated, “It is critical that manufacturers thrive in our community. I will continue to advocate for a smaller and more effective government and work with local organizations, like L.B. Foster, to create opportunities and jobs right here in the Spokane region.”

Attendees discussed the importance of extending the Positive Train Control (PTC) deadline to avoid serious consequences and costs for not only companies directly affected by the railroad industry, but also for the local and national economies. In 2008, Congress mandated railroads to install PTC on lines that carry passengers and/or toxic by inhalation gas, such as chlorine and anhydrous ammonia. The deadline for installation is December 31, 2015.

Attendees also thanked the Congresswoman for her support of the 45G tax credit. The Short Line Railroad Rehabilitation and Investment Act of 2015, also known as H.R. 721, was introduced in February and already has over 50 percent co-sponsorship in the House with 237 co-sponsors. H.R. 721 would extend section 45G of the tax code which expired at the end of last year.

Congresswoman Cathy McMorris Rodgers serves on the Energy and Commerce Committee. She is the Chair of the House Republican Conference, the fourth highest-ranking Republican in the House, and the highest ranking woman in Congress.