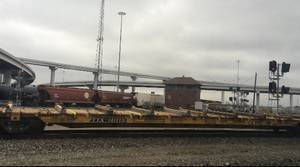 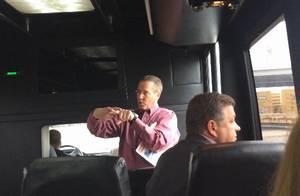 The NRC's grassroots program was created to invite United States Congressmen to visit NRC member facilities and construction project sites. These visits give the Members of Congress firsthand knowledge of the rail industry and demonstrate how rail contractors and suppliers are positively affecting the rail industry and the local and national economy. If your company is interested in hosting your Congressman for a visit, please contact Ashley Bosch to begin the process.
Fort Worth, TX - On 3/8/15, U.S. Congressman and Chairman of the House Transportation and Infrastructure Committee Bill Shuster (R-PA-09) joined representatives from BNSF Railway, Union Pacific Railroad, HDR, Inc. and the National Railroad Construction and Maintenance Association (NRC) for a tour of the Tower 55 project.

Upon his arrival, Congressman Shuster was greeted by representatives from HDR, including Senior Vice President, Global Director of Freight Railroads and NRC Board Member Scott Goehri and Vice President, Lucas Bathurst. HDR played a key role in the Tower 55 project by developing the preliminary plans, obtaining environmental clearances, and performing the engineering, design and permitting work.

Completed in September 2014, the $104 million Tower 55 project overhauled the nation's busiest rail intersection to more efficiently move freight and passengers both nationally and internationally. The four-way intersection sees about 100 trains per day and was known as one of the nation's biggest freight bottlenecks before this project.

During the driving tour of Tower 55, the Congressman had an opportunity to see various project elements including the new north-south main line that was constructed to accommodate additional capacity, volume growth, and mitigate train delays. In addition, the tour showcased the structural improvements to existing bridges and overpasses and the overhaul of at-grade public crossings and pedestrian access ways near downtown Fort Worth.